Probably the richest primary evidence from the ill-fated Dyatlov party are their photographs. Dozens of photos were taken, both before the outset of the hike and during the trek toward Dead Mountain. There were gifted photographers in the group; many of these are quite nicely composed. Some provide a relatable look at the doomed adventurers, while others are more mysterious.

In total, there were five cameras retrieved from Otorten. As mentioned previously, the group thought they only had four; Semyon’s body was found with an unknown camera which he had kept hidden from the group. Aside from the film in these five cameras, there was also a loose sixth spool of film, and some loose photos, whose origins are unclear. They clearly show the hike, and were introduced into the inquiry of the accident, but nobody seems to ultimately know where they came from.

Krivonischenko was the most avid photographer of the group, and shot the lion’s share of the Dyatlov photos. He has a good artist’s eye.

His early shots, such as this one showing Dyatlov and Thibeaux planning the journey, are often candid. He snapped a classic “picture-of-a-person-taking-a-picture” picture, showing Zina with her camera, and a great snap of Nikolai Thibeaux immediately after tripping over a sawhorse:

Another, gloomier shot shows a view of the abandoned village as the party departs for the mountain. 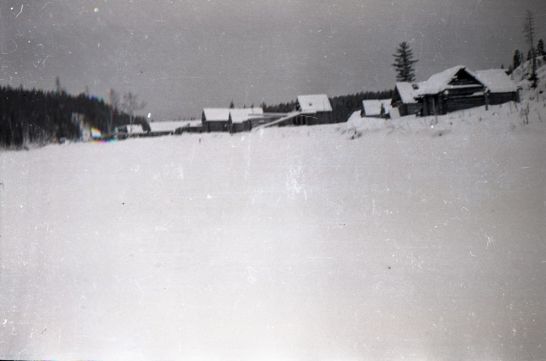 They appear to be in typically high spirits as they reach the Lozva River: 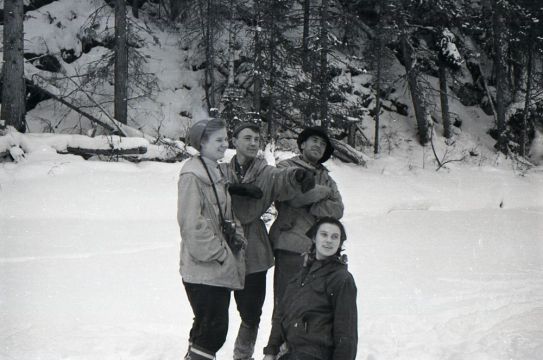 However, we begin to see some grumpy faces as they recognize that they will not be able to take this course as planned, and must resort to the rougher Mansi road. Dyatlov, in particular, is not impressed. 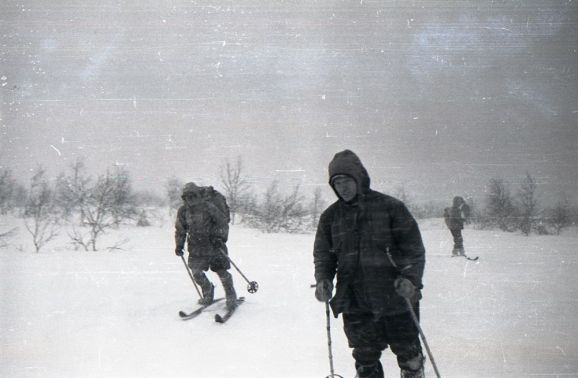 The group appears to stop for a while for what seems like a somewhat tense conversation about the future of the expedition.

The final frames of the Krivonischenko film show the party struggling forward in what appear to be whiteout conditions. The last frame is a blurred shot of what looks like a luminous sphere of some kind, possibly a long exposure with bad focus. This shot has confounded many and led to speculations that UFO’s were somehow involved in the group’s demise, as there were indeed reports of glowing lights over Otorten that night. Teddy, however, argues that it is a technical frame exposed by the film lab that developed the pictures. 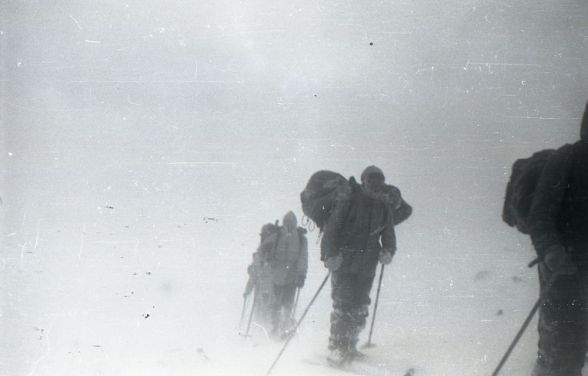 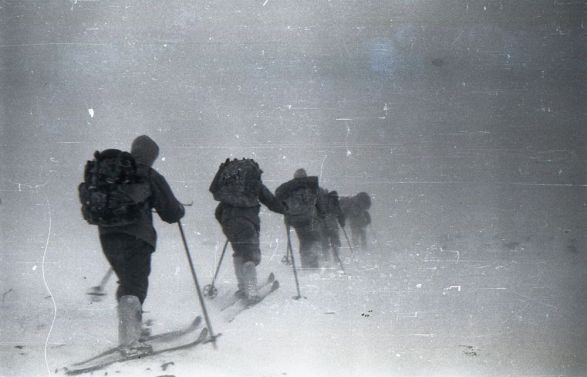 Nikolai Thibeaux took comparatively fewer photos, but, like Krivonischenko, he captured the strained sense of being lost as the group left the river and started following the Mansi trail: 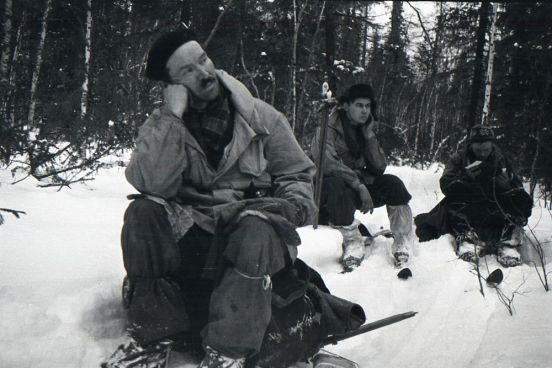 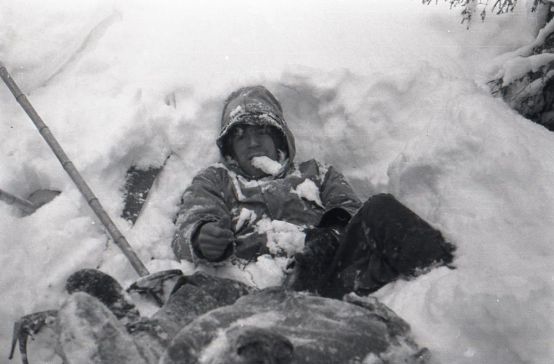 Thibeaux’s last, fairly alarming shot is of a darkened figure that seems to be approaching from not far off. To some, this is a photo of nothing less than a real-ass Yeti. Others just see an out-of-focus shot. 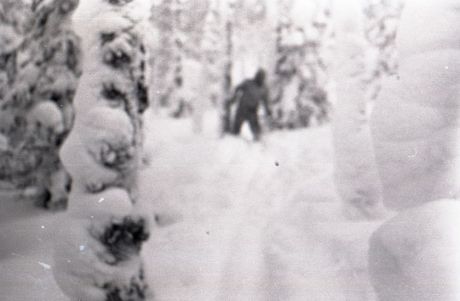 Slobodin didn’t take a lot pictures with his camera, and many that he did take were water-damaged and have large sections missing. He did manage to grab a great picture of Dyatlov climbing a tree, before things got hairy: 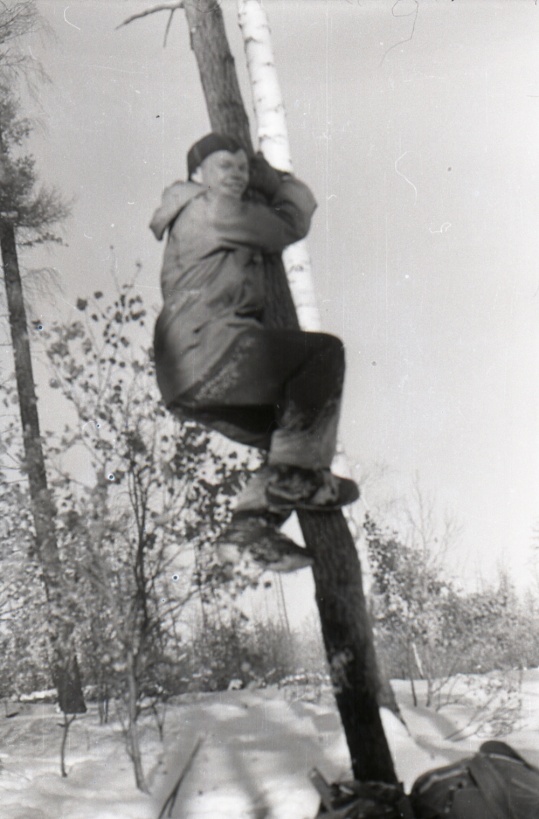 He also got one of the few photos the group took of the ominous Otorten itself, looming grimly in the distance beyond miles of undisturbed taiga. His final shot is a spooky, badly damaged frame showing the Mansi tree markings.

The loose roll of film mostly consists of staged photos of the group traveling together.

In this film, too, we see that the smiles have vanished around the time the group comes upon the Mansi tree markings. Apparently following the path of the Mansi hunter, as described by Dyatlov in the journal, we see the group leaving the open trail and heading into dense tree cover. 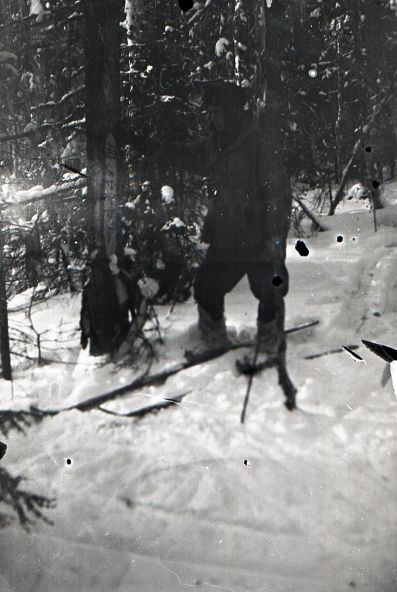 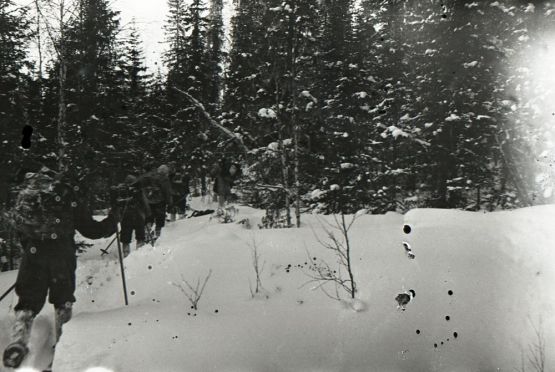 The final shots on this roll show the group either resting or preparing to make camp. The frames are badly damaged. The group is still in a densely thicketed area, which they will leave as they approach the mountain.

From the obscure loose photos presented at the inquest, we have shots of the tent, rigged up with Dyatlov’s homemade stove, which has a chimney that sticks out the side. The whole thing looks incredibly dangerous, if you ask me.

The final image is from February 1, afternoon on the day before the incident. The group is bundled up tightly and the weather does not look hospitable.

Finally, we come to Zolotaryov’s mysterious camera, which none of the other hikers knew about. The images on this roll are badly, badly damaged, and there are a few that don’t seem to show anything at all. Most are just black squares with white damage artifacts:

Some have seen in this damage clear evidence of UFO’s, or demons, or some other kind of unexplained horrible beings. I’m not so sure I buy that. However, there are a couple of photos on this mystery camera that are a bit more, well, mysterious.

One image shows a very bright light source on the left, which weakens toward the right side of the frame, as a real light source would (note that in the above, damaged frames, we see white ‘blobs’ with fairly well-defined edges.) There also seem to be three objects in the foreground, which block the light. The one on the left has the highest contrast, again as we would expect with a real light source. It may be that this is a photograph of something intensely luminous in the sky over the heads of three hikers.

Another image very clearly shows an illuminated tree branch. It’s hard to say whether the light source is behind the tree (swallowing it in its glare) or whether it is a light shined at the tree. In any event, none of the hikers in the Dyatlov party brought a flashlight with them in their flight from the tent.

By now, you’ve probably thought of about a hundred possibilities for what could have happened to this ill-starred expedition. Rest assured, there are hundreds more out there. Let’s run through a few of them.

DONATE
It is much appreciated.